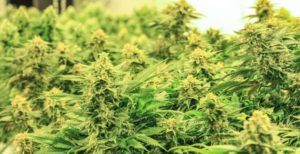 This is the first in a series of stories from Marijuana Business Daily examining wholesale prices in recreational cannabis markets.

Supply of midgrade cannabis flower is on the increase in Nevada’s adult-use market, though demand remains robust and the market has not yet become oversupplied.

Growers report an average-quality pound of flower is selling for around $2,000 a pound wholesale, down from as high as $2,800 a pound a year ago because the supply has increased.

As more producers come online and reach capacity, the market has seen an increase in middling-quality cannabis, which means the average price of cannabis has come down, though the state’s wholesale per pound flower prices are still higher than other more mature cannabis markets.

But high-quality flower is still commanding a premium, with pounds of top shelf material selling for well above $3,000 wholesale because it’s still hard to come by.

According to several Nevada growers, pounds of wholesale cannabis flower, by quality tier are selling for:

More people are trying cannabis for the first time, and those regular consumers are buying more. Plus, the major urban center in Nevada – Las Vegas – averages 45 million tourists a year, and Sin City’s market steadily draws curious buyers visiting from other parts of the world. Despite the demand, prices for mid-grade flower are still on the decline.

The overall cannabis market in Nevada continues to grow at a steady rate.

Marijuana tax data provided by the Nevada Department of Taxation shows that combined medical and recreational wholesale cannabis sales amounted to approximately $250 million from January 2019 through October 2019. In Nevada, both medical and adult-use wholesale cannabis is taxed at a 15% rate on the first sale to a processor or retailer.

The Associated Press reports that marijuana tax revenue collection for the month of October 2019 was the largest since legal recreational sales began in 2017. The state has collected $36.7 million in cannabis taxes through the first third of the 2020 fiscal year, an increase of nearly 16% from the same four months of the 2019 fiscal year.

A year ago, recreational cannabis was still new to Nevada and the bigger growers hadn’t built out their facilities.

But Wren added that higher-quality flower is in short supply, and selling for $2,700-$2,900 a pound wholesale.

“Those who can produce desirable, shelf-grade cannabis … are selling out as fast as they can make it,” he said.

Demand is still growing, according to Wren, with people buying more and new customers joining the market.

Shane Terry, CEO of Taproot Holdings, a vertically integrated cannabis company based in Las Vegas, said that while he has seen some downward price pressure, the overall wholesale price is “pretty strong.”

He also reported a “flood” of mid- and low-quality cannabis hitting the market from large-scale cultivators. Terry expects to see a reemergence of craft cannabis as growers pivot toward the higher price point.

Two other trends Terry said he is watching:

According to Hoffman, when the Nevada Department of Agriculture lowered the allowable limits of pesticides in August 2019 wholesale prices went up as some growers failed testing and the market hit a snag.

“A lot of cultivators were still using some pesticides in ways that had passed in the past,” he added.

The following chart shows the current acceptable levels of pesticides for Nevada’s cultivators. 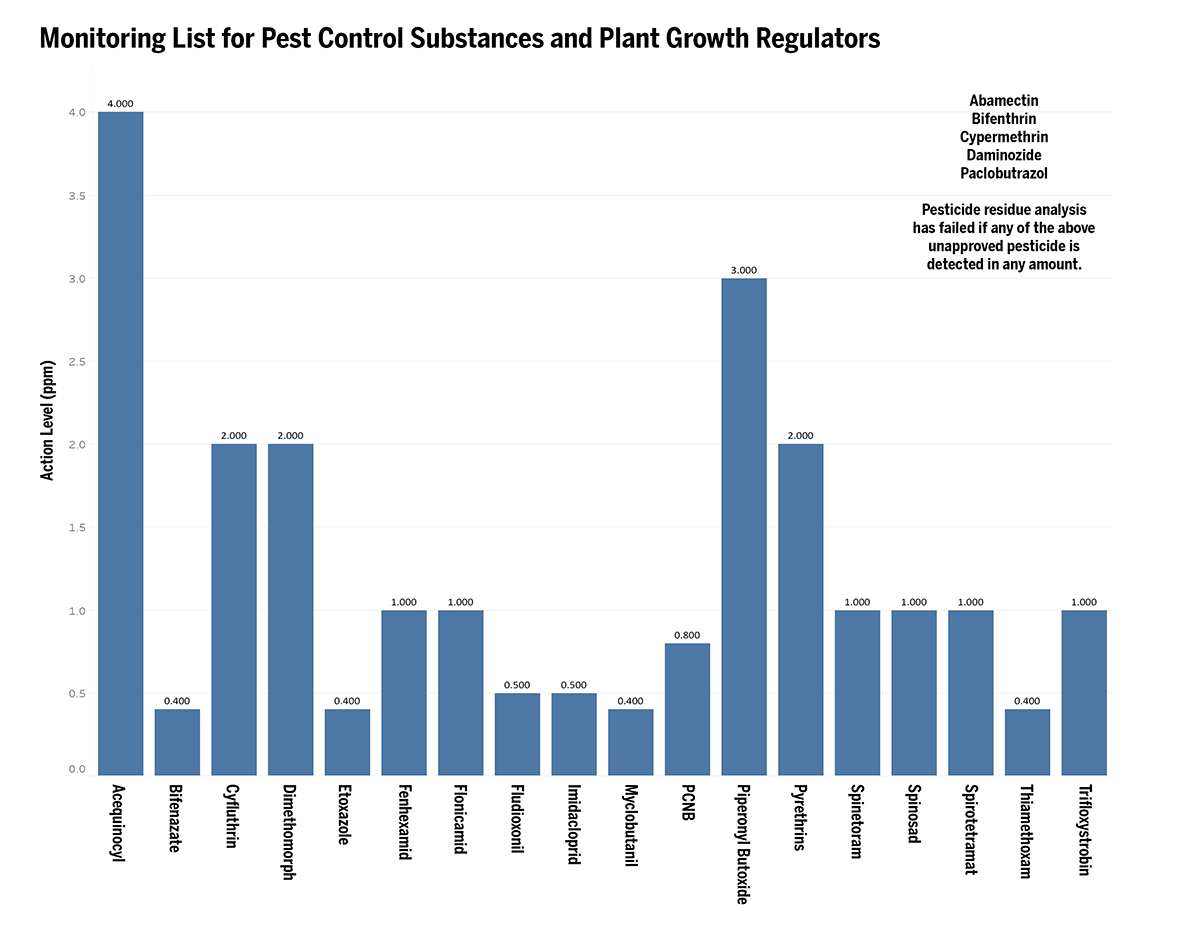 But others in the state say they haven’t seen a change in prices directly related to the change in pesticide testing.

Wren said most of the growers in the state aren’t failing.

“The levels prior to the change were so low that I can’t imagine there were a great deal of people using chemical pesticides and passing tests when they tightened them up,” he said.

Back in 2017, when the state added a test for the fungus aspergillus, there were a lot of cultivators failing testing, according to Wren, but most of the growers his company deals with now are pesticide-free.

“Anybody who’s smart is just running a clean grow and not using pesticides,” he said.

Hoffman said growers can decide to eschew chemicals and learn new techniques to manage pests and fungicides, but the steps “are not as easy.”

For example, a grower using pesticides might spray the plants every three to four weeks, whereas one using organic or natural remedies may have to spray every two to three days.

Depending on the integrated pest management system the cultivator uses, Hoffman estimates organic methods could cost $50 to $150 more per pound of dried biomass.

Nevada regulators recently shut down a Las Vegas cannabis testing lab after tested flower was found to have three times the allowable limit of yeast and mold. Last year, the Department of  Taxation launched an investigation into how the labs were operating.

Chris Rebentisch, CEO of 1933 Industries, a producer/processor in Las Vegas, said the trend among consumers asking budtenders for the cheapest flower at the highest potency has led some companies to shop around for favorable lab results.

“The labs have played a role in the prices in Nevada,” he said.

Wren mentioned that Nevada does have many high-quality labs who care about accuracy and standardization.

“We try to keep our products both procured from and sent to labs of that nature,” he added.

Although Wren has heard of several labs that don’t hold themselves to the highest standards.

“I don’t want artificially high numbers,” he said. “I want to know what our methodology in the cultivation facility is producing accurately on a repeatable basis so I can track it.”

But as more labs come under scrutiny some have been shut down, leading to a bottleneck in the cultivation supply chain, which slows down supply and causes prices to inch up.

Terry said a lot of cultivators have created their own in-house tests to pass when product is sent to the labs.

He expects testing standards to become even more stricter as the industry progresses, similar to the tough standards imposed on the gaming industry.

“The testing labs are the epicenter of product integrity and consistency,” Terry said.