Why Investors Should Be Upbeat About XOM Stock

A doggish Exxon Mobil (NYSE:XOM) has rid itself of the Dow. Now all that’s needed is less interest from income investors and those keen on long-term capital gains if the price chart of XOM stock has any say in matters.

It’s not exactly a secret. XOM was one of the top Dogs of the Dow stocks entering 2020. It’s a notorious and well-known list of typically shunned blue chips among income investors where bigger dividend payers are purchased under the guise of a reversion towards the mean.

Exxon shares had actually tacked on a dividend adjusted return of about 7% in 2019. But with the broader market on a comparative tear higher, the subpar performance and challenged conditions at most every angle the past few years still allowed Exxon to have its “open for business” placard visible to those seeking the safety of income from the dividend aristocrat stock.

As of Dec. 31, the oil and gas giant’s dividend paid a hefty and well-above average income stream of 4.99%. The yearly payout was enough to put shares in the second spot on the Dogs list and just a hair beneath Dow Chemical’s (NYSE:DOW) 5.1% payout. The income was also sufficient to put it ahead of IBM’s (NYSE:IBM) 4.8%, Verizon’s (NYSE:VZ) 4% and fellow energy goliath Chevron’s (NYSE:CVX) 3.9%.

But if misery loves company, XOM stock investors hadn’t seen anything yet.

Now firmly into the fourth quarter and 2020 is shaping up to be less of a dog and an a bonafide disaster for XOM shareholders.

Exxon’s dividend remains intact, but in well-documented nutshell, the coronavirus’ adverse impact on oil demand, producer trade wars and Wall Street’s near insatiable appetite this year for improving technologies for greener energy solutions have conspired to send Exxon shares down more than 51% year-to-date. And that aristocrat income stream which had some strategists licking their chops over? Well, it’s up to 10.2%.

But for Dogs of the Dow investors thinking today’s yield offers more opportunity next year, the index’s longest-tenured constituent was dealt a cruel sleight of hand trick in late August. Citing the need to cultivate a more balanced bellwether reflective of today’s economy, XOM was replaced by business software giant Salesforce.com (NYSE:CRM).

Apparently, Chevron’s inclusion is more than adequate exposure to the oil patch for Dow Industrials officials. 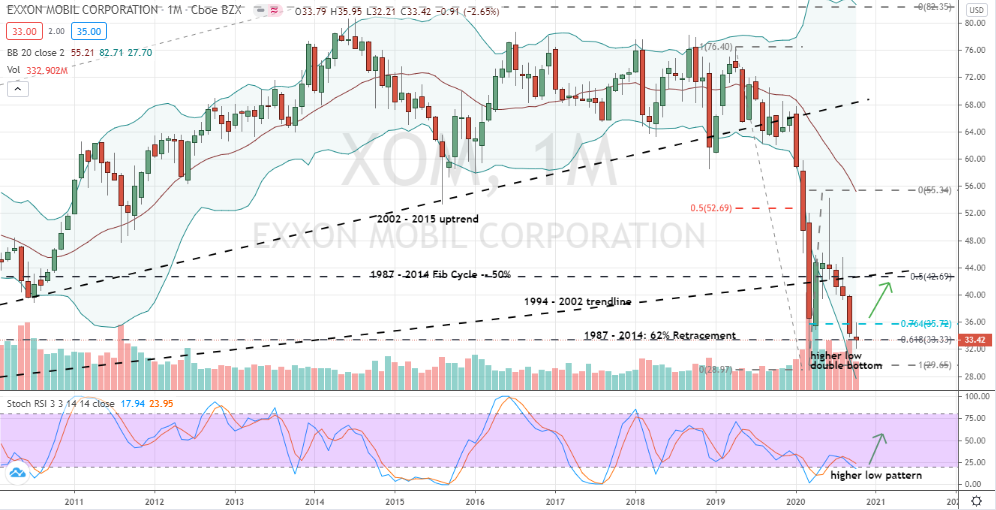 Year-to-date, XOM stock has paid $7.43 billion in dividends compared to cash flow of just $6.27 brought in over the same period. Something has to give, other than increasing Exxon’s debt.

Aggressively cutting the dividend would show Wall Street Exxon is serious about investing in the future rather than trying to pacify income investors at any cost. It’s a smart step other major integrated oil giants have already taken towards successfully repositioning in a changing energy environment, rather than holding onto an increasingly costly past.

Technically, a higher-low variation of the double bottom pattern is setting up on XOM stock’s monthly price chart. October’s second pivot within the formation is also taking on the shape of a doji decision candle. And it’s happening at the 62% retracement level dating back to the 1987 stock market crash.

And along with a bullishly positioned stochastics that looks poised to complete its own higher-low formation, November has my vote for more than just making America great again.

On the date of publication, Chris Tyler does not hold, directly or indirectly, positions in any securities mentioned in this article.

Chris Tyler is a former floor-based, derivatives market maker on the American and Pacific exchanges. The information offered is based on his professional experience but strictly intended for educational purposes only. Any use of this information is 100%  the responsibility of the individual. For additional market insights and related musings, follow Chris on Twitter @Options_CAT and StockTwits.