Why It’s Time to Nibble on Grubhub (GRUB) Stock


Investors feasted on Grubhub (NYSE:GRUB) in Tuesday’s session. The question remains, will they come back for seconds in the days ahead? Let’s take a look off and on the GRUB stock price chart for some answers. 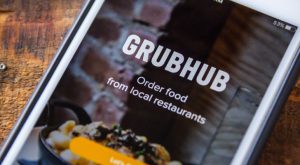 In an already crowded and competitive market which includes UberEats from Uber (NYSE:UBER) and DoorDash, having cash-flush Amazon bow out after a three-plus year ‘experiment’ in select cities is obviously a positive for GRUB stock growing its business. Many investors are also speculating the departure leaves the door open for a takeover by Amazon if it chooses to dominate yet another industry down the road.

In the here and now, after managing to top Street views in late April and offering up top-line growth of 39%, the Amazon news could assist in removing some of GRUB stock’s many detractors. Shares are heavily shorted to the tune of nearly 25% of the float. As well, while Grubhub has 17 buy recommendations, the company’s 11 hold ratings means there’s room, theoretically at least, for upgrades.

As the weekly chart in GRUB stock suggests, a deep corrective base of nine months and more than a couple failed bottoming attempts around the 62% retracement level have no doubt produced more than a few cases of heartburn for bullish investors. But that could be about to change.

The potentially good news on the price chart is GRUB’s multiple technical disappointments could pave the way for a new bull market to emerge with possibly less resistance. Many bullish investors once long GRUB stock have likely thrown in the towel during Grubhub’s lengthy correction.

Technically, I’m also upbeat on GRUB stock’s supportive-looking stochastics while holding the 200-week simple moving average and shares inching their way off the lower Bollinger Band. As well, let’s not forget Grubhub’s resident bears. Those players could come in handy in lifting Grubhub higher too.

My recommendation in GRUB stock is to simply buy shares today. With confirmation and guidance from the weekly chart, I’d look for the area in-between $85 – $90 for initial profit-taking. If our enthusiasm proves misplaced, a move below $65 in Grubhub looks like enough leeway before conceding to bears, with the necessary benefits of containing losses and offering solid risk-to-reward exposure if we’re right.

Disclosure: Investment accounts under Christopher Tyler’s management do not currently own positions in any securities mentioned in this article. The information offered is based upon Christopher Tyler’s observations and strictly intended for educational purposes only; the use of which is the responsibility of the individual. For additional options-based strategies, related musings or to ask a question, you can find and follow Chris on Twitter @Options_CAT and StockTwits.