Back in late May, yours truly suggested the 5G opportunity Nokia (NYSE:NOK) has ahead of it made NOK stock a buy. The 37 commercial 5G contracts Nokia had inked at the time was lighting the path ahead for Finland’s telecom-tech giant, despite the fact that NOK was still facing its share of headaches.

In the meantime, the figure has been ramped up to 42 contracts.

But that early-June news did nothing to bolster beaten-down Nokia stock. However, a rebound of NOK stock may be in the works. The comeback is just going to take some time to pan out, as NOK does indeed appear to have become a “show me first” stock.

The show is coming.

One of the 42 5G deals that NOK has received was with Taiwan Star Telecom, which is growing its existing network  to prepare for 5G service. It was the “off the shelf,” complete nature of Nokia’s portfolio that made NOK the easy choice for TST.

China Mobile (NYSE CHL) confirmed at last month’s Mobile World Congress that it would be the first to utilize Nokia’s Massive MIMO solution, laying the ground work for its 5G network. China Unicom (NYSE:CHU) announced on Wednesday that Nokia’s optical fronthaul hardware would help usher in its foray into 5G. Sprint (NYSE:S), T-Mobile (NASDAQ:TMUS) and BT Group (NYSE:BT) are all also tapping Nokia for help on the 5G front.

Given NOK’s confirmed 5G contracts, CEO Rajeev Suri’s June comment that his company wins “two-thirds of the time” when competing with rival Ericsson (NYSE:ERIC) for new business isn’t a tough idea to believe. His company is making new deals at a pace Ericsson has somehow been unable to keep up with.

But that just hasn’t mattered to investors, who ultimately dictate the price of NOK stock.

Slow Moving, But Not That Slow

When Nokia’s CEO, Suri, commented in May that “5G is not the future anymore. It is here, and Nokia is leading it. We are winning deals and rolling out some of the world’s first 5G networks” he didn’t necessarily mean that NOK was literally in the process of rolling out 5G networks.

For that matter, he didn’t mean that it would launch the networks during that week or month. It can take several weeks — if not months — just to put the new hardware in place and put it into operation. In some cases, the installations called for by inked contracts likely aren’t even scheduled to happen until next year.

Revenue from such deals can’t be booked yet, of course, and none has been. NOK made that point in conjunction with its Q1 report, and Suri reiterated it last month. The publicly available details of those contracts are minimal, at best; NOK doesn’t divulge the specifics of deals it makes, nor should it.

With 42 contracts in hand, however, analysts and investors alike are arguably underestimating how much revenue is in its pipeline for the latter part of this year and all of next year.

Analysts’  alarmingly anemic average estimates for NOK adds further credence to that theory. They’ve estimated that its revenue will drop by 3%, and only recover by about as much in 2020. The following year’s revenue growth outlook is only marginally better. Earnings per share is projected to improve at a faster clip, but still modestly, and still not rapidly until 2021. 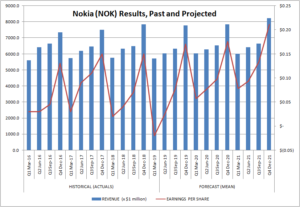 It’s going to take some time for Nokia’s 5G opportunity to bear fruit, but it may not take nearly as much time as the pros are suggesting.

The Bottom Line on NOK Stock

Any Q2 trouble may already be more than priced into Nokia stock, though.

Whatever’s in the cards, from Q3 on, the telecom technology giant is far better positioned to top revenue and earnings estimates than most investors appear to believe. The weakness of Nokia stock since April is still a dip worth buying if you can stomach a few quarters of volatility.

As of this writing, James Brumley did not hold a position in any of the aforementioned securities. You can learn more about him at his website jamesbrumley.com, or follow him on Twitter, at @jbrumley.