Why Stock Market Bears Should Be Watching Walmart (WMT) Stock

Walmart (NYSE:WMT) stock has taken off. Just since the beginning of June, the Walmart stock price has increased over 13%. Yet there’s been very little news to support the rally of Walmart stock. 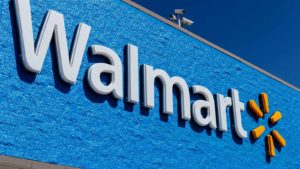 But that counterintuitively could be good news for Walmart stock. Those losses suggest all of the company’s businesses excluding e-commerce are more profitable than its reported figures imply. A $1 billion e-commerce operating loss, at the guided 27% tax rate, suggests a roughly 26 cents per share headwind to earnings. The hit likely is even higher, given that management has noted that much of the losses are coming from India’s Flipkart, where tax rates and tax deductions for losses are lower.

As a result, the impact of e-commerce losses on the company’s EPS might be closer to 30 cents per share or higher. So Walmart’s EPS, excluding its operating loss from e-commerce, would be closer to $5.15 this year rather than the current consensus estimate of $4.83.

The problem at this point is that even that $5+ figure still leaves Walmart stock trading at 22.2 times its earnings, which is an awfully hefty valuation. That’s a notable premium to the mid-teen P/E multiples that have historically been applied to Walmart  stock.

WMT stock isn’t the only name that’s benefited from that type of multiple expansion, and it’s not the only one that’s beset with these types of valuation questions. Indeed, in a market now at its all-time highs, there is no shortage of stocks in sectors like software and e-commerce that look too expensive.

But Walmart stock highlights a growing trend outside tech as well. Right now, the market will seemingly pay any price for quality. The question is if, or when, that trend will break.

Outside of the dot-com boom nearly two decades ago, it’s difficult to remember a time when more stocks looked outrageously expensive. Most of the obvious choices – as is usually the case – are in tech, but not all.

Beyond Meat (NASDAQ:BYND), for instance, trades at 25 times analysts’ average estimate of its 2020 revenue. It’s risen a stunning 153% from its initial close,  on top of a 163% increase on its first day of trading.

Shopify (NYSE:SHOP) has gained 134% so far this year, and trades at well over 20 times its 2019 revenue guidance. Another e-commerce play, Square (NYSE:SQ), isn’t cheap, either.

Snap (NYSE:SNAP) is unprofitable  and valued at $20 billion. MongoDB (NASDAQ:MDB) has generated $300 million in sales over the past 12 months and has a market capitalization of over $8 billion.

Those are just a few examples. There are dozens of stocks trading at over ten times revenue, even excluding early-stage biotech and pharmaceutical companies, which have little or no sales. Earnings multiples of 100+ aren’t uncommon right now.

Just a quick look around the market indicates that there at least are areas in which valuation doesn’t seem to matter. And as good as these companies might be, it would appear to take something close to perfection for investors to get reasonable returns after paying these prices. That sounds a bit like a bubble, as many observers have argued.

Walmart  Stock and the Price of Quality

But somewhat quietly, similar valuation questions have risen among older, lower-growth names. Walmart’s earnings multiples are the highest they’ve been since the financial crisis,  by far. Again, this is a stock that for most of this decade has traded between 14 and 17 times its earnings.

WMT stock isn’t the only one. Microsoft (NASDAQ:MSFT) is targeting EPS growth in the range of 10% a year at best  and now trades at something like 26 times next year’s average EPS estimate. That multiple, too, seems to be the highest assigned the stock since the middle of the last decade, when the company’s growth profile was very different.

Walmart supplier Procter & Gamble (NYSE:PG) has executed an impressive turnaround. But it trades at 24 times forward earnings while analysts expect 6% profit growth next year. The shares of another consumer giant, Coca-Cola (NYSE:KO), tumbled after KO reported ugly Q4 earnings in February. Coke’s pre-tax profits have declined over the past six years. Soda consumption is in the midst of a long-term decline, particularly in the U.S. Naturally, KO stock, too, is trading at an all-time high, with investors paying 23 times the average forward earnings estimate for it.

Investors are paying whatever it takes right now to buy quality or something close to it. McDonald’s (NYSE:MCD), Visa (NYSE:V) and Mastercard (NYSE:MA) all continue to soar and all sit at all-time highs.  Even Home Depot (NYSE:HD), whose multiples according to market theory, should be dropping this late in the macroeconomic cycle, is following the trend.

It’s easy to look at the likes of BYND and SHOP and see a market “bubble,” or something close to it, based on the multiples. But it’s not just growth stocks that are receiving historically high – and questionable – valuations.

What This Means for Walmart Stock Price – and the Market

The question is whether these valuations can hold. And that question likely depends in part on a key factor: interest rates. Expectations are rising for a Federal Reserve rate cut (or two) this year. That puts investors in quite a bind.

How, exactly, can an investor get returns? The ten-year Treasury bond yields a paltry 2.125%, with significant duration risk. (Duration risk simply means that if interest rates rise over that ten-year period, an investor won’t be able to sell the bond at par, leaving her with the choice of keeping below-market rates or taking a loss.) Savings accounts and CDs (certificates of deposit) pay even less.

Emerging market stocks, including Chinese issues, have significant risk. Europe’s growth is meager. Even among U.S. issues, historically “defensive” sectors – notably healthcare and certain kinds of real estate – aren’t as safe as they used to be.

In that environment, choosing quality and ignoring valuation makes some kind of sense. And those of us investors (myself included) who have been balking at valuations for several years now have missed out on gains by the likes of MSFT and Walmart stock, let alone the 100%+ gains that stocks like SNAP, SHOP, and BYND have posted.

But, again, the question is whether this phenomenon can continue. Bearish investors would argue that, at some point, valuations have to matter. Valuations have to come down. And Walmart stock would seem to be a prime candidate for a valuation cut.

After all, WMT is facing real challenges now. Amazon.com (NASDAQ:AMZN) is a formidable competitor. The Sam’s Club concept has stalled out. Walmart’s international earnings have declined for some time, though the stronger dollar is an issue. And WMT’s earnings growth remains meager.

It doesn’t seem like Walmart stock should be valued at 20+ times its earnings, but the valuation of WMT stock may  have less to do with its business than many investors believe.

EA Stock: Only This Type of Investor Should Try to Game Electronic Arts

Evolution to launch in NJ via William Hill